The film “The Straight Story” tells the true story of Alvin Straight, an elderly man who travels 240 miles to visit his estranged, dying brother. He has neither seen nor spoken with him in years.  Unable to obtain a driver’s license because of his age and health, he makes the journey across Iowa and Wisconsin--on his John Deere 110 lawn mower. We follow him on this six week journey through the picturesque countryside and the relationships he forms with people of all ages and backgrounds.
﻿﻿
Alvin was a World War II Veteran. One might pay him little attention if passed on the street.  But we see that he offers much more than meets the eye. He impacts the life of every person he encounters. Without giving more away there is a scene in which he talks about coming to terms with what he suffered in the war. “A lot of us drank after that…” he remarks. That scene made me cry.
My father, Arnie, had it tough as a kid. His father died when he was only four. In the same year his mother met and fell in love with a man who did not want children. Dad was left on the doorstep of his paternal grandmother on a cold winter day in 1934. Clara had been out shopping and when she saw him she scooped him up in loving arms, took him inside and raised him with his aunts and uncles. She had grievously lost her youngest son that year and saw in her grandson an amazing gift. Dad loved her dearly. 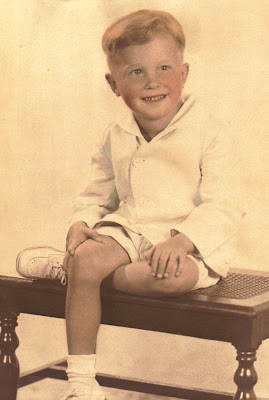 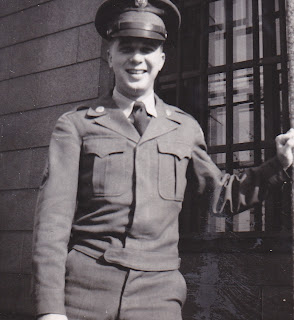 After her sad passing ten years later he went to live with his maternal grandmother. At that time he met and began dating my mother.  He fought in the Korean War at eighteen.  When it was over he was drafted again--this time into his lifelong dream--by the Cincinnati Reds Ballclub. Dad was a hard hitter and a great fielder. One night in a pre-season game he threw his body into second base with an athletic hook-slide. Realizing he would severely spike the second baseman he switched slides--something players are coached not to do. He shattered his left ankle, his career over before the regular season even started. The doctors said he could never play professionally again.

Once more he picked himself up, dusted off and moved on. He married Lizzie and went to work as a banker. They had four children.  Well, more, really. Mom had three miscarriages, and my baby brother was stillborn. Mom was saintly and heroic. Dad stoic. 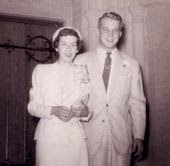 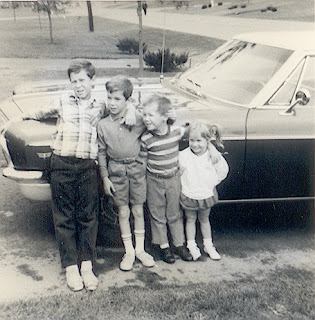 Very few knew what Dad had lived through. He was outgoing and sociable. Extroverted and energized by people, he could talk with anyone. Everyone loved him.  I think even my teenage friends hung out at our house not so much for my brothers and me as for Dad. He was engaging and fun. It was not out of the ordinary for Dad to bring home dinner guests and Mom was always game. Once he met the crew of the Zerstorer Rommel in the Baltimore Harbor and brought the German sailors home. For the whole weekend. We played soccer and swam in the river and cooked out.  Classic Dad.

But he carried much sadness deep within him, and by the time I was in junior high, I was aware that he struggled with alcohol.  It was difficult to deal with as a teen. I sensed unhappiness somewhere and I couldn't fix it, try as I might. His sanguine moments kept it bearable.  And his love for God.  Deep down Dad was humble, repentant, aware of his mistakes and, like a lot of us, much harder on himself than anyone else.

In the 1980's my grandmother's health was such that she could not live on her own. Dad helped her move out of the farmhouse she'd shared for decades with my late step-grandfather. Dad had reconciled with them years before. He took my grandmother into his home and cared for her well into her eighties. It was a great witness of forgiveness and love.
Dad passed away in October of 1995, a year before his mother. I was comforted with certain knowledge of his love for us. The teen years held some scars, but none too deep for healing. Not long after I lost Dad one of my students lost her father. I was remarking to a co-worker about how fascinating, successful and loved her father--a pretty famous man--had been, and how she could be very proud of him. My co-worker, a recovering alcoholic, leaned over the table intuitively and said, “Suzy, your Dad could very well have been more successful with what he was given in life, than that other man.” The truth of his statement struck solidly in my heart.
I thought back through Dad’s life. In the Korean War he was a forward scout. He and his radio man, Jimmy, were well into enemy territory when they were closed off on the side of a steep hill. They took fire and Jimmy was gruesomely killed in front of Dad, who pulled the radio off his friend’s body and called in artillery on his own position.  He scrambled up the hill believing he would not make it. The ordnance hit just as Dad got clear.  He was chased for days, many times hearing the enemy shouting taunts at him while he hid in the cover of brush and snow. He finally escaped and made it back to his unit. For his performance and valor he received the Bronze Star. 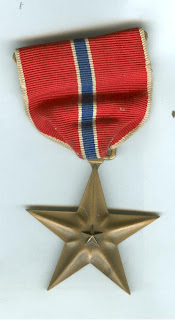 As a child I would see him staring at the medal, thinking he must be very proud. But nothing could have been further from the truth. I understood years later when he was dying. He wept one night on a hospital bed as I held his hand. He paused suddenly, looked at me with moist eyes and said softly,  “I’ll finally see Jimmy again.” He slept deeply then. I realized that he had carried the responsibility and weight of Jimmy’s death with him all of his life. He had carried many losses.
Dad lived two more years and he seemed a changed man. Sweet and happy, he was the father I loved so dearly. Reconciling death and the past was healing for him. Peritoneal dialysis, scores of medications and injections were taken without complaint. He was happily playing cards one evening with my mother, brother, aunt and uncle when his heart suddenly stopped. He slipped away in my brother's arms, my mother's name on his lips. At the funeral I remembered his words from the hospital bed and I smiled thinking of his reunion with Jimmy, with his beloved Clara, with the father he had barely known.

I will always miss my father. He gave me so much, taught me so much. He helped me see that there are Arnies and Alvins all around us. That each person's life, regardless of age or condition, is important and complex. That through reconciliation we are given grace and peace--and we begin again, anew. Scars may remain, but they are reminders of our capacity to love, to be loved, to hurt and to heal. Life holds pain but it holds so many more blessings. We have only to begin again each day, to be thankful in all, to seek to forgive and to be forgiven. To be reconciled to our one true Father, through His dearly loved Son, who took on all the pain of humanity, and is the key to peace that passes all understanding--and to Joy.
Suzy
The Abbey Farm
Posted by The Abbey Farm at 8:53 PM

Coming home on a Spring day 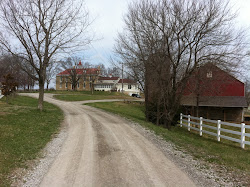 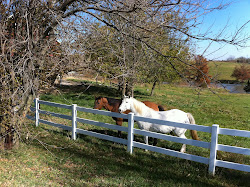 Love it when the college "kids" come home! 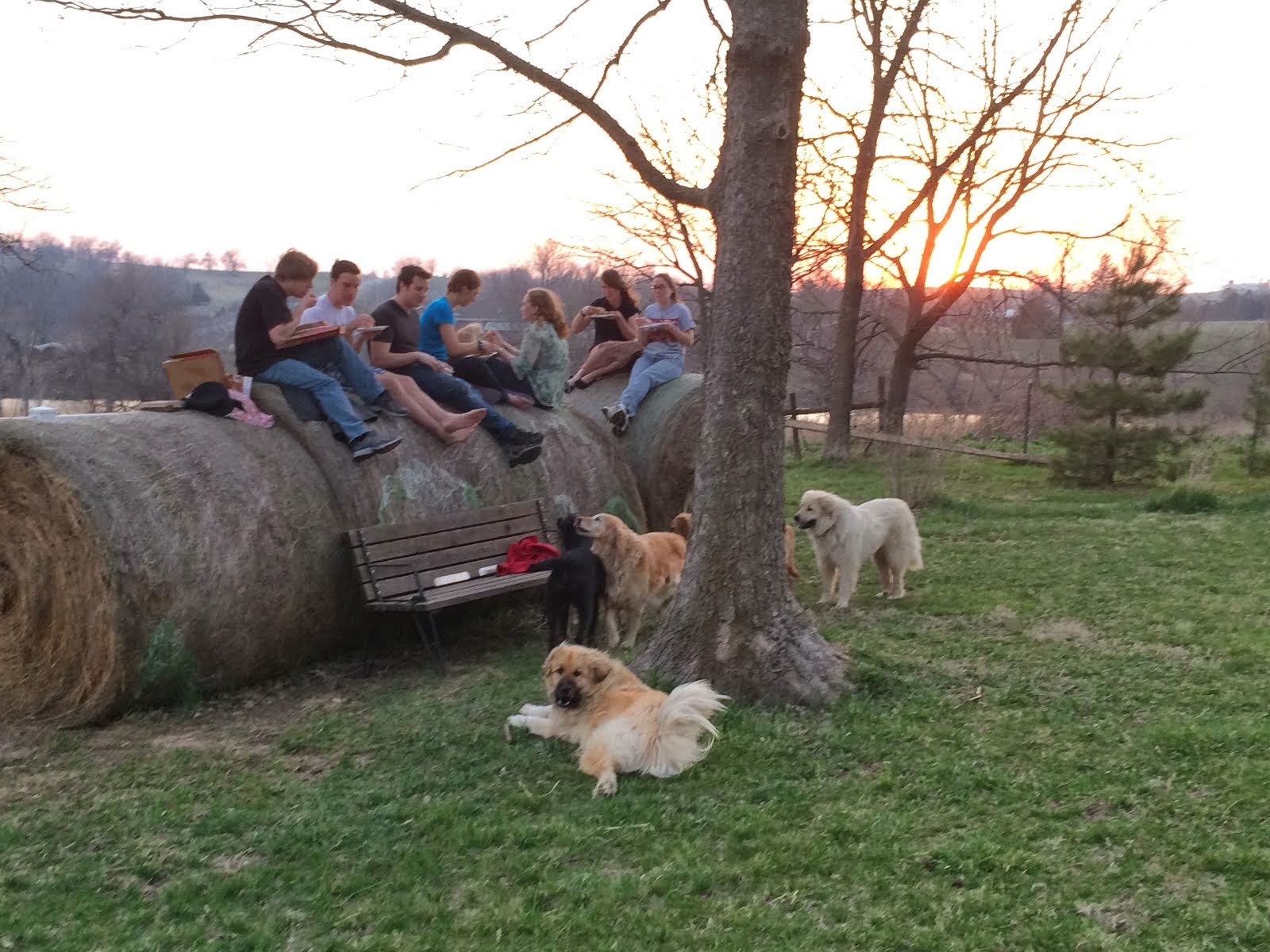 Winter on the farm 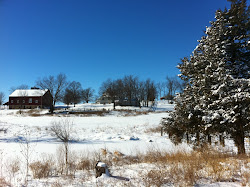 The Abbey Farm
Built by Benedictine Monks in 1890, the Abbey Farm was a large dairy farm and vineyard providing food and goods for the monastery. A century later it is an idyllic place to raise a large family. I grew up in Northern Baltimore County. At that time we rode horses for hours without worry of traffic or trespassing. We waited a year to see The Wizard of Oz, It's A Wonderful Life or Charlie Brown's Christmas Special. It was a simpler time. Life brought joy and sadness; young romance, a twenty-something divorce, remarriage, widowhood, remarriage again, and ten beautiful children. My wonderful, late husband Bob and I had two little girls. After his tragic death I met and fell in love with Bruce, a Lt. Colonel in the U.S. Army, and single Dad raising two daughters. Together, we became a family of six. A decade later, twelve! Our oldest is now 30, our youngest, 8. We now have two amazing sons-in-law and a beautiful granddaughter! Life throws its curves, but God turns them into His homeruns. Life isn't always easy, but that's what makes it rich, and keeps one humble at the feet of Christ.